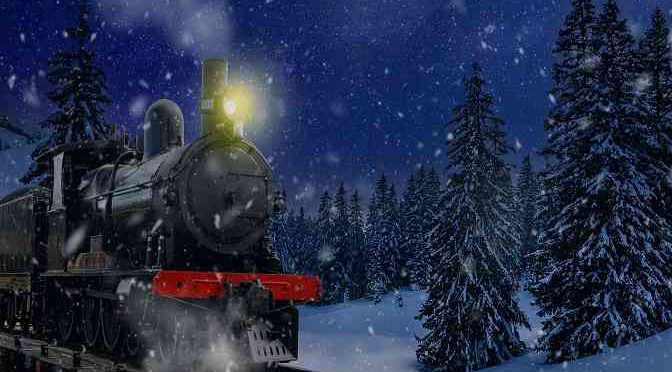 Once there lived a boy whose name was Tyler. He lived with his parents and little sister Annie. He asked his mother, “Can we start decorating the house for Christmas eve”? “No, Tyler. We have to pay our loan”, said mom.

Upset, he went to his bedroom. Suddenly, he heard an ear-piercing sound. Only Tyler and his sister heard it and rushed out.

They were shocked to see a big train in front of their house. The most astonishing thing was that the train was 10 feet above the ground on a magical track. The train slowly landed on the ground. The ticket collector asked, “Do you want a ride?” They immediately agreed.

In the train, they saw many children enjoying the ride. They went and sat on a seat. Suddenly, Tyler noticed a red button near Annie’s seat. On pressing it, a secret passage opened visible only to them. They went inside and saw millions of books on shelves. Tyler opened a book and a snow monster came alive from it. On the passage wall read a message – ‘Only love shuts the monster’. Annie found a Valentine’s book. When she opened it, the snow monster was sucked into the book.

The passage disappeared, the ride was over and they returned home and slept. Next morning, both were surprised to see their house decorated and there were gifts below the Christmas tree. Tyler opened his gift and saw the Valentine’s book. Both realized that last night was real.

// This fictional story has been penned by 7-year-old Aditya Suresh and was chosen among the top finalists at the Read Your Story event organized by Beyond Academix. //