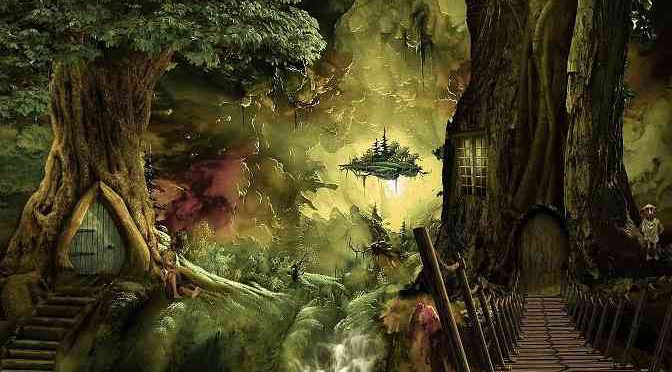 It was a chilly morning. I was playing with my friends outside when a sudden sound shook the earth! We were scared. “Was it an earthquake? Or an asteroid  from outer space?”, we wondered. It was just a fraction of a second but left us with numerous thoughts.  “Should we run back home? Or look for shelter nearby?”. Our brains seemed to have stopped working.

Suddenly a black hole popped up out of nowhere. By the time we realized what was happening, it sucked me in like spaghetti! My eyes were closed, and my heart was pounding. I was  nearing the singularity. I was stretched more and more and felt as if I was going to die. All was over but wait! All wasn’t over. I was spit out of a white hole into a strange new planet. That’s when the the very thought came to my mind – “I’d have to survive.” How – I didn’t know that but I had a plan in my mind. I’d make the tools essential for survival. I would make a shelter home,  get food and find a way back to earth. I knew it wouldn’t be that easy but I was determined.

First, I needed to make a shelter to stay but when I looked at the trees around, I noticed that they were all really big, like 10,000 chickens long. How would I arrange for wood for the shelter!?  Anyway, I didn’t have an axe or any other tool to cut it down. Secondly, the tree would have fallen even if I would have managed to cut it, so how would I cut the trees without having them fall? These thoughts  ran through my mind for a long time. The good thing was that the wilderness there was just like  earth’s lush greenery. There were beautiful flowers and fruits but there was one thought that was bothering  me – “Was I the only complex organism here?” I mean I knew trees and plants are complex  life and they existed there but I was looking for more complex life like animals and more. I  checked but found nothing.

While I was finding other signs of complex life, I stepped on something shiny. It  was sharp silver and I found a thick stick. OMG! Right away a thought popped up in my  brain. I could shove the sharp silver piece into the thick stick and make an axe! Though the problem with this idea was that there would be nothing to keep the sharp silver piece stuck into the  thick stick. Then I saw a gooey but sticky substance. I took some of the substance, put it on the thick stick and put the sharp steel on it and made an axe! Now that I had an  axe, I could chop down trees and make a shelter. I tried looking for small trees instead. I  found them and cut them like a chainsaw! I put the logs in order and soon I built a  strong and safe shelter. I even made a wooden bed and chair. I rested with my axe for a while. Then I decided to make other tools. My! It took days but the hard work paid  off. I made weapons like a spear; then I made a fishing rod with a stick and some  thread. I made a whole bunch of other tools.

I was safe. I even added a door to my shelter which was locked now. I was inside  thinking about what to do. Right at that moment, suddenly there was a lot of howling! I  stayed quiet and didn’t move. Soon I heard foot steps and sniffing. My heart was pumping like crazy and my eyes kept blinking. It happened almost every day. I had my  axe in my hand ready to attack if they broke in, whoever they were. But then I realized  that I had a problem. They might keep coming and that was a huge danger. My options were to either fight them or move to a safer place. I decided to fight because I couldn’t move so much stuff. So when they came, I went out and growled at them. They were wolves. It was a do or die situation! I took my axe out and slashed them. They attacked me in return. I  was scared but slashed one in the throat. That wolf died and the other wolves got scared and escaped. Then I looked at the dead wolf and said “Sorry.” I wondered what to do with the wolf? Eat it? NO! I just decided to let it stay there on it’s home planet. I ate a  fruit and some seaweed.

Things were getting worse! Now that the wolves knew my identity, they could return  and I was more and more homesick. While sitting on my chair, I was thinking that I had to find a way to  get back to earth. Right then, I saw something far away. It was a spaceship! If I could get there, I could use the spaceship and get back home. I was so excited to see the spaceship. I decided to begin my journey. I  took my tools, waved good-bye to my shelter and said “Thank you for keeping me safe”  and went on my journey to the ship. It was a long journey. I ate wild fruits on the way.  Soon I reached the spaceship but it wasn’t working. I looked for something to help me  start the ship, just when a paper fell with a code. Lucky me! I wrote the code in the system  to reboot. A robot voice from the ships controls said “Where do you want to go?” Then I remembered that I didn’t get all my tools and that they were outside the ship. My Axe! The  very axe that kept me alive and all the other tools. I rushed and got them all inside the ship, closed  the door went to the cockpit. I said that I wanted to go to Earth!

The ship flew up and a while later, I could see my shelter far away.  I would soon be back home. Everything was going to change to what it was supposed to be. Then the ship  turned on its turbo boosters and went into a black hole. I was scared about what was happening and I had no idea where I was heading. Soon, to my surprise, the ship was spit out of a white hole  and I saw the Earth! Finally I was back. Everybody had been wondering where I was. I told them  my story but nobody believed it. Of course, I couldn’t blame them. It was good to be back home finally. I wondered what if I had to stay there forever? I was feeling very sleepy and could not keep my eyes open.

Knock! knock! I could hear the incessant knocks. I opened my tired eyes and was shocked. It was my mom at the door. It was morning and I was in my bed. It was time for school! That is when I realized that it was all a dream. Phew!

// This fictional story has been penned by 10-year-old Aditeya Sashreek Samala from Minnesota, USA and has been chosen for publication on our platform from the weekly submissions //