My sister and I did not ASK to drive on an abandoned road, or stumble into Canada, spend the night in jail, raft across the Missouri river, and most of all, we did not want to get a speeding ticket. You might not believe I was convicted of stealing a car when I was 10 years old but here, I am, telling you the tale of my very own. It all started on June 15th, 2009.

We were boarding flight 2624. Let us be honest, we could have taken a direct flight but it got cancelled. Just at the last moment, my sister and I stumbled onto another person and went into a line for a different flight check-in. The person who checked our ticket said, “Hmm!”. We just went in. The security guards caught me, and I was carrying my dad’s passport, so we were sent to spend the night in jail. Mom did not know, so only Uncle Jerry came to bail us out of jail. The next day (UNSUPRISINGLY) Uncle Jerry taught us to drive his car. Mom and dad were extremely busy in their monthly meeting, so they did not care much about us. But when they were back home, they really got upset by our behavior because they were thinking we stole Uncle Jerry’s car. After convincing my parents for two days, they agreed to send us on a cross country trip with Uncle jerry. As we are naughty, we somehow convinced Uncle jerry to let us drive the car instead of Uncle doing it. Uncle jerry gave us 10,000 dollars each and we were off. We took a camera and we first photographed the Statue of Liberty. After that we were on the 95.

We were driving down south until we got to Atlantic city where we ate lunch. I never had a better pizza in my entire life. The olives were like sweet apples. We thoroughly enjoyed eating it. After finishing our meal, we got on the 295 and shortly, we were in Delaware.

Delaware was slightly boring, but at Wilmington we were back onto the 95 and soon, we were in Maryland. And finally, we reached Baltimore where we saw this sign: We got super excited as we were going to the nation’s capital. Oh well, we took a few pictures in D.C! So, after that we went to stay in a hotel and used 300 Dollars. The next day we continued after eating a, soggy, bitter omelet. I don’t want to recollect that horrible taste again.

Our road trip was really turning into excitement as we reached Virginia. Virginia is the place where most civil war battles took place and the birthplace of most of the presidents. It took an hour to explore the place. Our craving for exploring the country was increasing, so we decided to go to Richmond. At the Welcome center of Richmond, we got this T-Shirt which brought the feel of being wanderers within us. 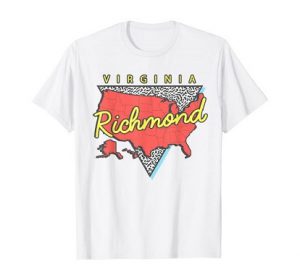 The next morning in the hotel, they were charging 300 dollars per meal, so we decided to not take that. We went South where we entered North Carolina. We were at Kitty Hawk, the birthplace of aviation. Later we made our way to Durham, North Carolina and we were on 40. Now, as you know the I-40 goes to California, but we wanted to get on 66. Or ROUTE 66 so that we could touch Virginia again.

We spent that night in a hotel in Charlotte, where breakfast was just a salad that tasted like boiled apples. And we continued going North on I-70. We were on a fairly boring drive until Virginia. It has extremely strict driving laws. As we were driving continuously, without realising I fell asleep. Seeing this my sister took charge of driving.  We were going at 100 miles per hour, and I was woken up by sirens where we were given a speeding ticket. Later we were in West Virginia. We stopped in Charleston where my sister booked a hotel, and the next day we had creamy mushroom soup. We stopped in St louis and then we were dragged by the Mississippi., post which we were in Iowa, and then Nebraska, where we drove away.

We were going South to Joplin, Missouri. Due to our age, it was taking us a lot more time to look at different directions and cities and google maps. Hence, we could not figure out where we were until we saw the cops stopping at U.S-Canada Border!

Well, we managed to talk to the cops, but as we were 10 years old with no adult supervision, cops did not allow us further. They pulled us from the driveway and took my parents’ contact from me and gave them a call.

I know you are going to think that we were doomed but as we are very naughty and clever, we gave Uncle Jerry’s contact. He is our life saver and who gives us a life full of memories. The police handed us to Uncle Jerry after thorough inspection and he took us back to Los Angeles where my story ended.

2 thoughts on “Tribes and Thieves”