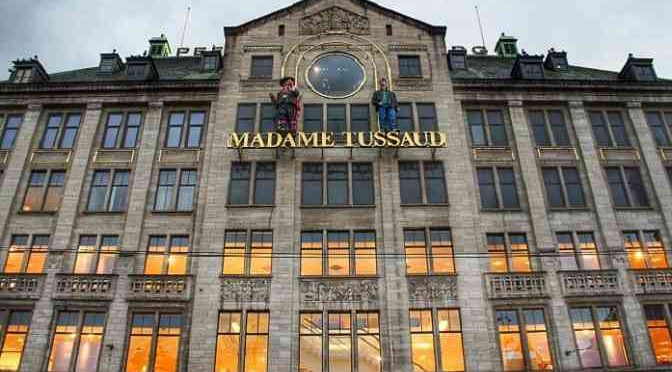 It was a lovely sight as we were passing through a garden. The beautiful green trees and the fruits hanging on them made for a peaceful and mesmerizing view. We were on our way to Madame Tussauds and I was eager to see the wax statue of my favorite actor, Tony Stark. Once we reached, I couldn’t wait anymore to witness the figurine of everyone’s favorite and the most adept actor in the whole world.

Before we could get inside the museum, there was a sudden commotion and I discovered that Tony Stark himself was there. A crowd had gathered around him and then out of the blue, to everyone’s shock, some goons appeared and attacked him. They held him as hostage and I heard them say that they intended to kill Tony Stark in the museum. I rushed to the security personnel, who were already in action, to inform them about what I had heard and requested them to be alert. They were all set to go inside the museum with large forces as the gangsters had many projectiles. An alarm was buzzed by the museum security and there was an announcement instructing the visitors to evacuate the museum at the earliest with the help of the security staff. The gates of the museum were immediately closed as soon as the visitors had vacated the place. There was so much mayhem around and everyone was scared. At this point, no one was sure whether the gangsters were inside the museum or outside it. One of the security guards made a blunder as he didn’t notice a set of keys that had fallen down. This was used by one of the kidnappers to easily enter the museum. Tony Stark was tied to a wall and was about to be shot but fortunately, the security and police forces arrived in the nick of time to save him. After all the brouhaha and action, everyone was relieved as everything was sorted.

I went and took a selfie with Tony Stark with his wax statue, which was gleaming with diamonds and pearls, as the backdrop and he promised me that he would let me watch one of his upcoming movies for free in the movie theatre.

//This story has been submitted by 12-year-old Harshil Goel who resides in Hyderabad. He had written this tale as a part of  the Creative Writing Classes which BTB conducts. The kids were given different word prompts to pen a short story and his prompts were “Museum” and “Actor”//